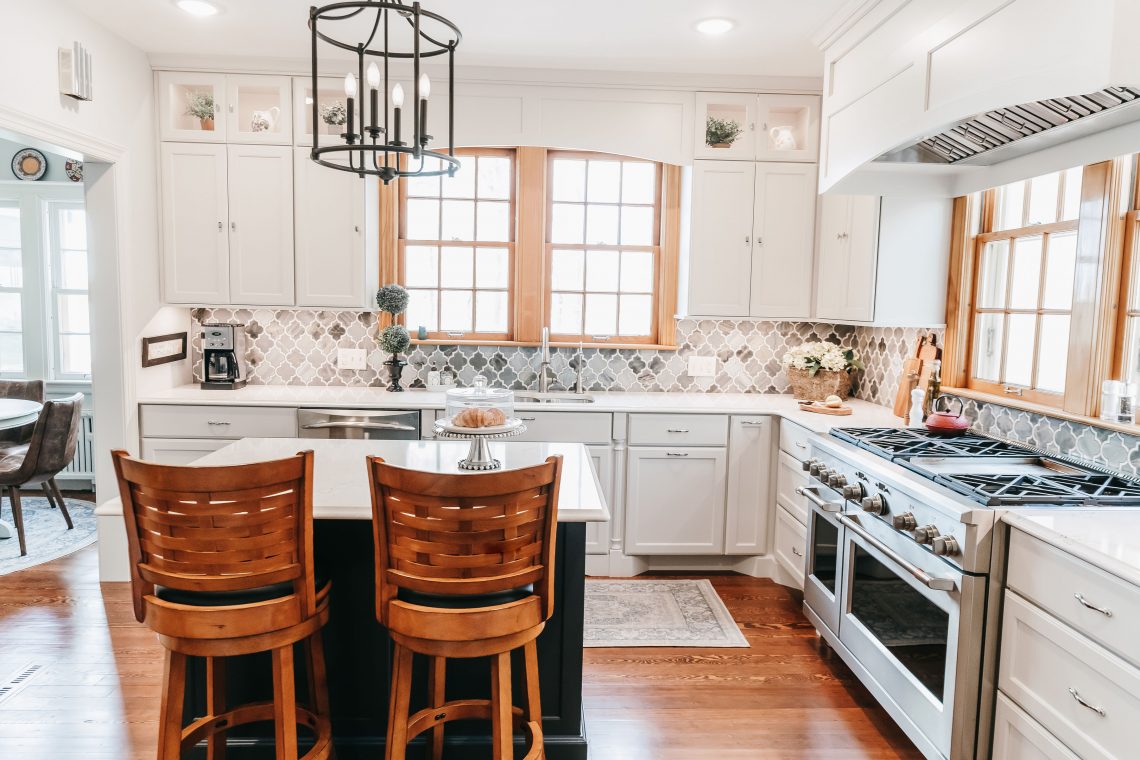 In 1936, Walter Kasper decided to build a two-story tudor on the banks of Budd Lake in Fairmont MN. Moving to town from Owatonna Walter brought a crew of European craftsmen that were working in the area, over to help bring his vision to life. He was an engineer with meticulous craftsmanship that shows in every area of the home. 84 years later, the home is as structurally sound as it was when it was built.

Walter’s wife, Laura was very gifted with design and put a lot of thought into every room of the house. The home features beautiful woodwork in every room, with detailed trim that you do not see anymore in new builds. Some of the walls even feature the original wallpaper that could be found in a luxury wallpaper line today.

In 1980, after raising a family and living out their lives in the Tudor, Walter and his wife Laura passed the home onto their son Frank and wife, Kate to move into. Frank was 60 when he and his wife moved in and enjoyed the home into retirement. Last year the home was passed down again, to their son John and his wife Patti (who had just turned 60) for them to enjoy and share with their family.

John was happy to move into the beloved family Tudor that he had spent so many holidays in growing up. To him and Patti, this was a place where the whole family was welcome, where the family could come from all over and feel at home.

Now how to update parts of the home without ruining the character of the home, and the unique charm that gave it a special story that meant so much to the family?

Last year John and Patti contacted Deb Williamson, interior designer, and owner of Inspiring Interiors to help update their two-story tudor. Deb was instantly excited to take on the task.

“We didn’t want to make a lot of changes, we just wanted to simplify the place,” said Patti. When John and Patti decided to update the place they didn’t want to tackle a little here and there, they wanted to get it done and enjoy their home. John and Patti had met Deb through their General Contractor, Ryan Lunn, and worked with her on a previous project. They knew she was the right fit to help with this very special renovation.

“We were thankful that we, as a couple, liked the same design concepts and style. However, we don’t know what we don’t know. Deb would show us things we didn’t know existed and had wonderful ideas to help focus us” said John. “Originally we were just going to repaint the cabinets, but we decided if we’re going to do this, we’re just going to do it right!” In reference to a full kitchen renovation. A home renovation of any size can be a very stressful undertaking. The choices are oftentimes overwhelming and can make the process unenjoyable. “Deb took a lot of pressure off of us because she brought samples and pushed us outside our comfort zone. She helped us re-imagine our kitchen and make it work for us.” Said Patti.

“I love a great challenge!” Says Deb Williamson of Inspiring Interiors, and this kitchen had plenty of them! In 1936, kitchens were designed differently than they are today. We had a relatively small space to work with and a lot of big ideas! Our first task was to find some extra square footage and design a new cabinetry plan. We managed to free up space from an adjoining closet to recess the refrigerator which allowed us to create a multi-purpose island with lake views and bump out the range area under the window to accommodate cutting-edge appliances. John and Patti wanted to keep both of the original windows in the kitchen and found a photo in a magazine of the hood in front of a window for inspiration. This presented multiple challenges in cabinetry design, installation, plumbing, and electrical. The couple was persistent in making all of us involved think outside the box and the idea eventually prevailed with this amazing range/hood combo perched right in front of one of the original windows. We incorporated many details into the cabinetry including multiple crown moldings, decorative legs, wainscoting, and base valances to complement the original character of the home. We also incorporated many modern, updated features including a garbage/recycling center, spice roll-outs, and large, oversized drawers throughout to deliver this kitchen right into the 21st century!”

Aesthetics would be another important element contributing to the success of this design plan and we focused on classic and elegant selections. We added a pop of color to the space with a classic navy-blue island, topped in a soft, alabaster Cambria countertop with dark and light blue veining that flows across the surface. John and Patti selected commercial-style appliances perfect for large family meals and gatherings. We finished off the space with beautiful blue marble mosaic wall tiles that tie the entire space together and look like they could have been original to the home. It was an absolute pleasure contributing to the successful updates of this beautiful Budd Lake home that will be enjoyed by the Kasper family for generations to come!